I received a selection of Earth Day related books from HarperCollins. Frankly, this was probably a bad idea of theirs, because, while I am all in favor of teaching kids to be responsible citizens and telling them the truth (yes, I revealed to my little brother that there was no Santa Claus. My grandma was traumatized. He thought it was obvious.), I am not in favor of scare tactics, which a lot of "environmental" books for kids seem to use. Recycle or the poor, cute polar bears won't have anywhere left to live! Well, let's see how it goes.

I've seen some reviews of Roberto and Me by Dan Gutman and had decided not to get it. Full disclosure: I didn't read this thoroughly, I just skimmed it. I don't have the time or the interest. I don't really think my kids will either. Yes, they like Dan Gutman. Yes, some of them like baseball. However, I can't bring to mind any that are interested in baseball+time travel/historical fiction+ecology. If you have young patrons who love this story (or series) let me know and give me a good argument for putting it on the shelf. Otherwise, it's going into the donation stack. [Good arguments given - put on the shelf and did actually check out quite a few times. Will be getting more in this series.] 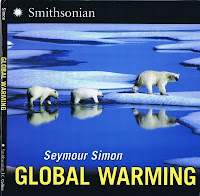 Well, if you're going to have books about global warming for kids, you might as well have them done by Seymour Simon. Gorgeous photographs, simple and mostly balanced prose, although with the frequent uses of "some scientists think" it would have been nice to hear some of the opposing arguments. One complaint. The section which discusses flooding says that "if average temperatures rise.....sea levels all over the world may rise by a half foot....This may happen over years or decades or may take longer than a century...." So, Simon makes it clear this is scientific projection (or what some might call "speculation"). Lots of "ifs" and "mays" in there. Accompanied by photographs of flooded houses and cities. There's no reference in the back as to where these flood pictures actually came from. There's a two page spread on what people can do to use less fuel and "slow down rapid climate change" but no accompanying information on whether scientists think small changes like more people riding bikes will actually affect global warming. There's a glossary, index, and small list of websites for further information about global warming. Not a good effort for Simon, but I can't think of anything better at the moment. 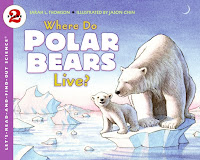 Ah, the poor, cute polar bears. I am not in favor of science books for young children narrated by anthropomorphic animals. They get outdated fast. A lab-coated polar bear with glasses tells us facts about polar bears and their habitat. First half of book. Second half of book - we have a little narrative nonfiction going on as the polar bears catch and eat a seal. Then we segue into the destruction of the polar bear habitat because of ice melting, the size of polar bears (hey, I'm just describing it) and a last, lonely polar bear in the sunset looking at the melting ice. There's a follow up section on "Why the world is getting warmer" and "What can you do?" Save the poor, cute polar bears by writing on both sides of paper! No, I'm not being snarky, that's one of the suggestions. This book is a stage 2 Let's read and find out aimed at "primary grades" I'm assuming that means 1st through 3rd grade.

Where do polar bears live? by Sarah Thomson, illustrated by Jason Chin
ISBN: 0061575186; Published December 2009 by HarperCollins; Review copy provided by the publisher 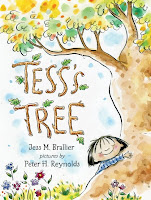 I'm not sure what Tess's Tree has to do with Earth Day. A little girl loves a tree. A storm blows down some of its branches and her mother has it cut down. She's very sad. She has a funeral for the tree. "A neighbor with a white collar said, 'We, friends and family, are gathered here today to celebrate the life of Tess's tree." Yep, they have a funeral for the tree and all the neighbors talk about how much they loved it. The end. The pictures are cute, but frankly this was a pretty dumb book. They don't even plant another tree at the end. If you want books on trees, or even sentimental books on trees, I'd suggest Elisa Kleven's Apple Doll, or you can fill in the blank here with your favorite tree book.....

Ok, this is better. We like Fancy Nancy (I've already purchased this book for my library, btw). Although I would like to see more "real" picturebooks from O'Connor and a little easing up on the franchise stuff that's rolling out, we are happy with whatever we get. Fancy Nancy is all set to celebrate earth day and has lots of practical suggestions for being "greener". But when she gets carried away, her parents have to remind her that she needs to care about people as well as the earth. I like Fancy Nancy's balance of the the fancyness that many little girls love with the demands of everyday life 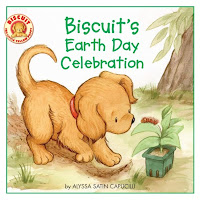 We are also very fond of Biscuit. In this story, Biscuit helps his owner celebrate Earth Day by cleaning up the woods, decorating reusable grocery bags, and other simple, practical suggestions. Biscuit is very cute and sometimes cute is good! This book only appears to be available in paperback and library binding and my library only collects the easy readers, so it's not for us, but if you need some more books on earth day for younger readers/listeners, this is a good suggestion.
Biscuit's Earth Day celebration by Alyssa Satin Capucilli
ISBN: 978-0061625145; Published February 2010 by HarperCollins; Review copy provided by the publisher
at April 12, 2010

Sounds like a new Fancy Nancy will be hitting our shelves soon. Btw, I'm happy to hear that I'm not the only person who doesn't appreciate scare tactics used to supposedly educate children about the environment.

Yes! So glad I'm not the only one too! I like to see interesting facts and ideas and practical solutions and things kids can do. Not scary speculation - what good does that do? That's also the reason I love the Scientists in the Field series - they show how scientists arrive at their conclusions and that scientific research is an ongoing thing, not a pronouncement from on high!