Binky to the rescue by Ashley Spires 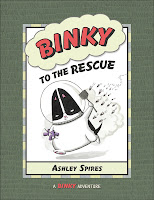 Binky. Is. Back. Yay!! In the first Binky story, we met the intrepid space cat, who valiantly defends his family from aliens (bugs) despite the dangers, including the occasional "poot" of space gas. Now, in his neverending pursuit of aliens, Binky has, *gasp* fallen into outer space! Now Binky is up against the most dangerous alien of all....wasps. Will he survive? More importantly, will everyone make it back safely from...outer space?

There are so many nice things about the Binky series. First, it's very funny in a way that kids of all ages and adults can appreciate it. There's enough subtlety and irony that adults can enjoy it, but not so much that kids feel like it's going over their heads - or talking down to them. Binky has a genuinely original premise, lively narration, and snicker-worthy dialogue. The art isn't too complicated for beginning readers and the text and art perfectly complement each other. The text itself is in a nice block printing that's very accessible for new readers. Finally, it's got a simply lovely binding, a rare thing in a graphic novel.

This series is very popular in my library and I'm thrilled to see a sequel! Long may Binky fight against the aliens and explore outer space!

I know, isn't it exciting! I'm so pleased that smaller publishers are getting into the graphic novel game - KCP especially is turning out some great stuff!