Hans my Hedgehog by Kate Coombs, illustrated by John Nickle 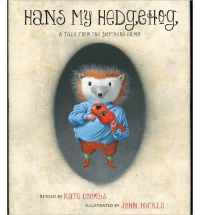 Join me again on Thursday, January 26th for an interview with Kate Coombs talking about folktales and her inspiration! You can check out the rest of the blog tour at her blog, Book Aunt.

The original Hans My Hedgehog folktale is a more violent version of the familiar Beauty and the Beast, involving the familiar tropes of a transformed man and a woman who must prove loyal and loving. Hans, however, also takes his revenge on the nobility who trick and betray him.

In Kate Coomb's new retelling of this odd folktale, she emphasizes the themes of seeing beneath the surface and tones down the violence to create a tale that is faithful to the original story, but also appropriate for modern audiences and sensibilities.

A prosperous farmer is so desperate for a son that he says he wants one "even if he's half a hedgehog" and that's exactly what he gets, Hans My Hedgehog. Hans has a special skill with pigs and eventually discovers another talent - music. But even his beautiful fiddle playing doesn't win him a place with the village girls and boys, so he rides off on his rooster to live in the woods with his pigs. When a lost king appears, Hans promises to show him the way out of the magical forest, if he gives Hans the first thing he sees when he gets home. Of course, his daughter appears, but the king has no intention of keeping his promise, and his daughter certainly doesn't plan to either. A few months later, Hans shows another king the way out of the forest, but this king's daughter promises to honor her father's word.

Hans hears of his promised princesses from an old woman and sets off to claim them. When the first king and his daughter refuse to honor his promise, Han's pigs wreak havoc on the palace and then depart, taking "half the king's fortune." At the second place, Hans is honored by the king and his daughter and the wedding begins. Hans plays his fiddle until, overcome by the magic he falls to the floor...and is helped up by his new bride, no longer a hedgehog but a man.

Coombs explains the changes she made in an afterword to the tale, showing how she shifted characters and events to emphasize the enduring themes of the stories; being a misfit but wanting to be loved and accepted. The text is simple enough to be read to younger audiences, but includes the repetition and odd little details that make folktales intriguing. John Nickle's colorful acrylic paintings bristle with a motif of spines throughout each picture, with Hans My Hedgehog the central figure in bright clothing and with a cheerful, determined outlook. His plump and sturdy pigs trot after him and his brilliant rooster steed shines with stunning colors.

Verdict: This is an excellent retelling of an unusual folktale and will make a great addition to storytimes and library collections. Recommended.

I love folktales and their various interpretations and formats. This one sounds especially interesting and thought-provoking. I think it would make for an interesting classroom discussion. For what age group is Hans My Hedgehog most appropriate as a read aloud?

I'm planning to use it in my Elephant and Piggie Kids' Club, which is for ages 3 - 8. It's perfectly appropriate for preschoolers, who will appreciate the funny pigs, but kindergarten through 3rd grade will probably better grasp the story.