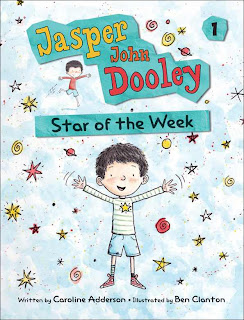 Jasper John Dooley has been waiting forever for his turn to be Star of the Week at school. He has it all planned out from Show and Tell to special treats.

However, the week gets off to a bad start when Jasper's Show and Tell of his lint collection is completely eclipsed by his friend Ori's new baby sister - and then all the kids laugh at him! The misunderstandings continue from bad to worse until Jasper and his wooden "brother" Earl get sent to the principal's office. But with some help from friends and perseverance, the week turns out well after all.

Adderson's slightly quirky little boy is perfectly drawn. Jasper is excited to be the center of attention, but disappointed and embarrassed when things don't go the way he'd planned. His absorption is funny and honest - when he gets to the principal's office, he's completely shocked that the whole school doesn't know about Star of the Week. He can't believe nobody understands how amazing his lint collection is. Clanton's black and white cartoon illustrations are the perfect fit, showing an enthusiastic small boy in various humorous situations.

The plot thread of Ori's baby sister is the funniest part of the book; Jasper is fascinated with this new addition, while Ori just wants some sleep and a break from the crying. Jasper at first really, really wants a baby - then realizes maybe he doesn't after all, which sets off another train of mishaps. I liked the easy way diversity was blended into the story, without whapping the reader over the head as well.

I'm excited to see more beginning chapter books, especially featuring boys, but I wonder if the boys will be excited? There are so many of these series for girls - Judy Moody, Clementine, Ramona, Princess Posey, Junie B. Jones, etc. but it seems like there are fewer for boys - Roscoe Riley, Horrible Harry, Stink, etc. In my library, at least, while the girls will voluntarily choose these stories (and they pick the ones with boy main characters as well as girls - lots of girls like to read Stink for example) it's moms picking these books for boys, who, if left to choose on their own, seem to gravitate towards nonfiction, Star Wars, and comics. Occasionally a realistic chapter book series will grab them - Roscoe Riley was very popular for a while - but the "gentler" realistic reads, focusing on kids' emotional reactions to family and school, appear to be choices of moms and teachers. Anybody else have thoughts on this?

Verdict: Although I have reservations on how much boys are actually interested in these "everyday life and feelings" type of stories, parents and teachers choose them frequently. I think Jasper John Dooley has enough humor in it to keep boys interested and the illustrations are attractive. Recommended!

Thanks for the great review! (I'm the illustrator) I hope boys will take an interest in the book without too much prompting, but it is true that most seem to gravitate to nonfiction or comics more than realistic fiction. The boys I work with seem to like it but that may be because of my being part of making the book. Crossing my fingers!

Well, I gotta say I love the picture of Ori in his hat *snicker* Our copy should be shelf-ready soon and I'm going to wave it at some kids and see what happens (-:)