Nonfiction Monday: Life in the ocean: The story of oceanographer Sylvia Earle by Claire Nivola 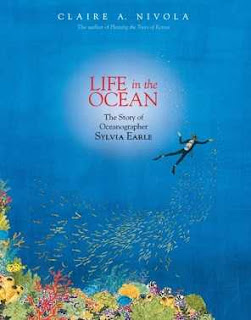 I thought Claire Nivola's Orani was a beautiful book, but with a limited potential audience. I was delighted to see that she's produced a book that's just as breathtaking artistically and textually but more accessible to children and adults looking for a read-aloud.

Nivola tells the story of Sylvia Earle, oceanographer from her childhood of observation in the New Jersey country and her first introduction to the ocean after their move to Florida to her ground-breaking explorations and discoveries of ocean life.

Sylvia Earle's adult life of exploration looks at her accomplishments - building and diving in submersibles, studying the ocean, and living underwater and also at the beauty of the ocean that she loves and tries to convey to the world.

Nivola's illustrations are amazing - she has managed to show the vastness of the ocean while still focusing on the stunning details of teeming life beneath the waves. Her watercolors are spare but detailed, colorful but simple. The picture of the whales swirling in elegant balletic moves beneath the waves is one of the few pieces of art I've seen that complete captures their weightlessness.

An author's note gives more details about Sylvia Earle and the plight of the ocean, while a bibliography lists a number of sources for the frequent quotes from Earle sprinkled throughout the text.

Verdict: The text is lengthy for a read-aloud to younger children like preschoolers, but would be great for an older read-aloud for grade school kids or reading aloud over a period of time. However, children and adults of all ages will appreciate the artwork. I rarely purchase picture books that aren't optimal read-alouds for at least one age group in storytime, but this is more than worth making an exception to that rule.

That cover art is gorgeous!

Thanks for the great review. Yes, I so agree with you about the illustration of the whales and the sense of weightlessness. That's just what caught my attention in my review of this book last week.

Would love to add this to my picture book biography collection. Thanks for sharing! :)

I love the cover too. My son would love this book I think.