EllRay Jakes is not a chicken by Sally Warner, illustrated by Jamie Harper 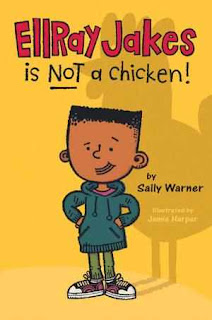 I'm very excited about this new beginning chapter book series. It has so many elements I've been looking for!

The story: EllRay is the smallest kid in third grade and two of the biggest boys are picking on him. Why? He doesn't know. He also likes to make people laugh and it's getting him in trouble in school. So, his dad makes a deal - behave for a week and he'll get to go to Disneyland. This turns out to be as hard as EllRay thinks it will probably be, but he manages it in the end and even has a temporary truce with the bully, Jared.

I've been frustrated for a long time by the lack of minorities in everyday fiction. Not high concept, not celebrating culture, not historical, and not stereotyped settings. Not every Hispanic kid is a migrant worker. Not every African-American lives in a poor urban area. This is exactly the kind of character that the kids in my predominantly white, small Midwestern town will read about - because it's focused on people, not their race or culture, and whether the kids are a minority or not they can relate to EllRay who has identifiable problems. His race isn't ignored - he wishes there were more kids who looked like him "just so it would come out even" and it's a sensitive point for his dad and the other adults who are worried that he's getting bullied because of it, but Ellray knows that's not the point "Jared would have said something if it was. He is not the type of kid to keep things to himself. That much is obvious. Anyway, there are plenty of other things that could make him want to pick on me."

There's a lesson to be learned by EllRay of course - that words can hurt as much as punches and his jokes have repercussions. EllRay and his little sister both think and talk about kids' interactions in school - the way girls are often mean to each other and how it's different than the way boys are mean and how sometimes you're friends one week and not friends the next. The adults mean well, but as EllRay points out "outside is when school really happens for kids." The adults' interference sometimes helps, but sometimes causes more problems and in the end the kids have to figure it out on their own and it's not easy.

Verdict: This new series is funny with some good points for thought. Parents might be uncomfortable with the kids resolving their issues with a fight - but it's a realistic portrayal of how kids relate to each other and they can use it to discuss ways kids can resolve their issues on their own. We've had this series for about three months now and it's very popular! Highly recommended.