Hooey Higgins and the Shark by Steve Voake, illustrated by Emma Dodson 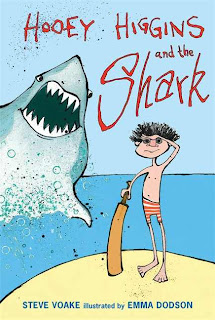 Hooey and his best friend Twig have fallen deeply in love - with a giant chocolate egg! Unfortunately, they have no money but they do have Hooey's big brother Will, a master of planning. Together, the three boys set off to capture a shark and set up a show with it to earn money.

Hooey is wackier and funnier than Daisy Dawson, but also much more British. Beginning readers may find unfamiliar British words but there's nothing wrong with a little new vocabulary! Just as Voake perfectly captured the character of daydreaming, animal-lover Daisy, he's got a great set of characters in Hooey, Twig, and Will. Kids will love their insane exchanges as they set up their shark-catching plans.

"He took a deep breath and put his head to one side, listening for any underwater swooshing noises that might give the shark's position away. "Can you see it?" called Twig. "Not yet," said Hooey. "Maybe it's swimming upside down so we can't see its fin," Twig suggested. "Cunning," said Will. "Very cunning.""

While the boys' shark-catching scheme doesn't work out quite the way they had expected, they still manage their hearts' desire, if not quite in the way they had hoped. Dodson's ink and wash illustrations have a splatter effect, which added to her wacky stick-like figures fits the story well, although I find the characters' eyes a little creepy.

Verdict: Beginning chapters books continue to grow rapidly in popularity at my library as more and more kids look for easy books but want to move on from easy readers. Both boys and girls will enjoy this new series. Recommend to kids who like funny stories and won't be put off by a few Britishisms. Kids who have seen their older siblings reading Wimpy Kid but aren't old enough to tackle it themselves will also snap this up. Recommended.

Ooh. I like the look (today!). Nice font, understated yet appealing background. I'm a big fan of green. I know this is probably a work in progress, but so far, so good!

Oh, I think I'm done - no time to fiddle anymore anyways, since we're trying to redo our library website, a much more painful proposition!

This looks funny, and that's what my kids look for in a read-aloud chapter series. We've finished Magic Treehouse for now so I will look into this one next!

Thanks for participating in the I Can Read carnival!

You'll love it! The author also has a longer series, Daisy Dawson, which is a big hit at my library. It's about a little girl who dawdles and then discovers she can talk to animals!