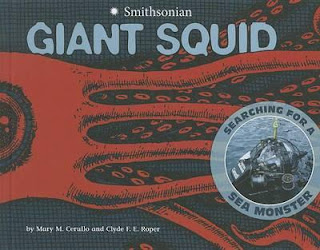 This Smithsonian title published by Capstone is lavishly illustrated with striking black and white tentacles, photographs, and historical illustrations. It has an excellent layout, different colored pages highlighting different arcs of the plot from historical legends about the giant squid to current scientific research.

The text follows the ancient tales of the kraken up to present-day explorations of the giant squid's deep sea habitat, focusing on the lifelong studies of Clyde Roper. Beginning with his observations of snails, he moved on to study other mollusks and eventually became fascinated with the giant squid. With the help of other scientists, he was able to discover many unknown details about the squid's life. The book ends with the first live photos of the giant squid and talks about some of the aspects of this mysterious creature that are still unknown.

A glossary, index, and further reading are included.

Verdict: This is a great look at current research on the giant squid, written for a younger middle grade audience. There's plenty of gory dissection pictures as well as scientific photos to wow the readers. Pair this with H. P. Newquist's Here There Be Monsters for older kids and have a squid book for every reader! Highly recommended.

ISBN: 1429675411; Published by Capstone; Ebook provided by the publisher through Netgalley; Purchased for the library
at June 04, 2012

I laughed at your comment, "Is it possible to have too many giant squid books? In my opinion, you can NEVER have too many!" It reminded me of our son's favorite book at one stage about gross/disgusting (his words, said in awe) sea creatures. We read it so many times that it fell apart.

Thanks again for joining the Nonfiction Monday round-up today.

This does look good. Thanks for the recommendation.
Tammy
Apples with Many Seeds

Nice review. Thanks for sharing this book. It sounds like a great read!