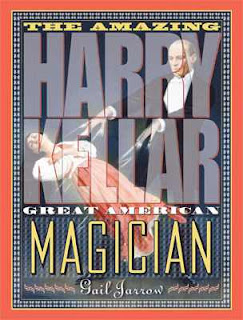 Although mostly forgotten today, Harry Kellar was once a world-famous magician, known and respected by his contemporaries and the magicians he trained and influenced, including Harry Houdini.

The book opens with a brief note about the many stage posters used as illustrations and an account of Kellar's performance for President Roosevelt. The narrative begins with Kellar's adventurous life as a boy, running away from home at age 11, he traveled from Pennsylvania to New York. After a few years, he became fascinated with magic and apprenticed himself to a stage magician. Eventually, he formed his own act and traveled across the world, to Australia, South America, India, and other exotic places. After many years of hard work, he achieved his goal of being the greatest American magician and inspired a new generation of famous magicians. As Jarrow tells the story of Kellar's life, she also talks about the history of magic, including the superstition of magicians' power coming from the devil.

The book is laid out to feature the many stage posters, with full page posters, black and white photos, and short chunks of text with bold headlines. The book is oversized, a little taller than the average picture book. Quotes, captions, and historical information are included in sidebars. Back matter includes a timeline, source notes, bibliography, more information on magic and magicians, and an index.

Verdict: It's an interesting idea, and the writing is brisk and informative, but the layout felt very cluttered to me. Also, the length of the text would require a middle grade reader, but this age is usually very reluctant to pick up a book that looks like a picture book. Plus, it's just under 100 pages and most biography assignments, at least in my school district, require 100 pages. If you have an audience with a strong interest in  magic and history, this might work for your library.

(If you've had problems with challenges to Harry Potter on the basis of magic=Satanism, be aware that there are frequent discussions of this superstition throughout the book and many of the vintage posters feature Kellar with devil or imp assistants)