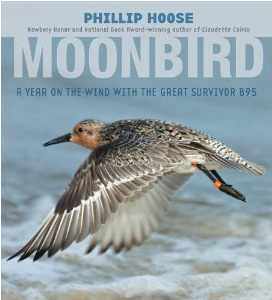 The Moonbird, a rufa red knot, has survived twenty years and thousands of miles of migration between Tierra del Fuego and the Arctic. Despite declining populations, threatened habitats, and dwindling food, he continues to make the amazing journey.

Hoose follows the bird, also called B95 after one of his bands, through the migratory cycle. Along the way, the reader learns about how these birds change their body composition in order to survive flying nonstop for days. We meet the scientists and activities who work with shorebirds and follow along in their discoveries over the years.

The story includes profiles of and interviews with scientists and activities, an appendix with ways youth can get involved from simple science projects to large organizations, extensive  source notes, bibliography, acknowledgements, and index. There are stunning pictures of the rufas and other shorebirds, maps, and aerial pictures of the hidden places the rufas use on their migration.

I found Hoose's profiles of the various scientists involved really interesting, as he details their varied backgrounds. Some were previously teachers or secretaries; others talk about their childhood and how they became fascinated by shorebirds. Hoose's text is dense but not overwhelming. He writes simply but with undeniable enthusiasm. The reader becomes drawn in by the powerful story of this one amazing bird; I was fascinated to discover that he's been sighted again, just a few months ago. Still going strong at over twenty years old!

I was intrigued by an earlier title about arctic migration that came out this year, North by Nick Dowson, and it was interesting to read a more detailed account of one of the animals that undertakes this amazing journey. I fell into the pace of the story and it's certainly well-written and researched. But will kids read it? Middle grade nonfiction is often a hard sell. Younger kids love to read about strange animals, weather, disasters, castles, weapons, you name it. Older kids are pickier. They're busy, the books often look too much like picture books, there's too much text, the vocabulary is too challenging. Many schools relentlessly focus on fiction, to the extent that by middle grade most kids don't consider nonfiction really "reading" (nor do their parents, an argument I'm frankly a little sick of having with patrons. If they're not refusing to let their kids read anything that looks like a picture book "those are for babies, my child needs chapter books" they're telling the kids they can't read anything above their lexile level, which pretty much rules out most nonfiction - Moonbird is an 1150, so way out of reach of most kids who read by lexile). The story of Moonbird is fascinating, but it reads at a slower pace than kids used to the rapid plots of popular fiction and movies will like. The outdoor explorations that many of the scientists credit for their interest in shorebirds rarely happen for kids anymore, not even the kids in my small, quasi-rural town, unless you count the ones hanging around the gas station in the evenings and they're not looking for birds.

Are you depressed yet? I am. However, we soldier on. There will be kids with a scientific bent, interested in animals, who will pick this up. The story of Moonbird has a good hook for booktalking - a bird that has flown thousands of miles around the globe and continues to defy expectations and survive under increasingly difficult circumstances. There are parents who encourage their kids to read what they're interested in and don't care about lexiles (at least in the summer). I'm currently focusing on updating our history section and animal books for younger children, but I don't regret purchasing this title as part of my ongoing, uphill battle to get kids to explore the world and go outside!

How cool that he has been sighted recently!

First...good for you that you have a goal for these kids and their reading lives. Second, this looks like a great book - that cover is beautiful.