Nonfiction Monday: One step at a time: A Vietnamese child finds her way by Marsha Forchuk Skrypuch 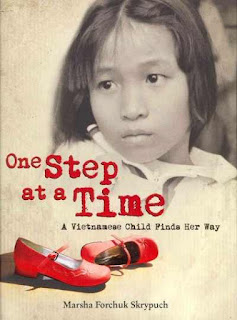 This is the sequel to The Last Airlift, which told the story of Tuyet, an orphan rescued from Vietnam. In the second part of her story, Tuyet is settling in to life with her Canadian family, but her polio-damaged leg doesn't allow her to walk properly and gives her constant pain. She needs an operation to correct her damaged leg and it can't wait.

Skrypuch's simple language captures the fear and bewilderment of a girl who's barely had time to deal with the trauma of her escape from Vietnam and new life in a strange country when she's confronted with yet another frightening experience. Tuyet still doesn't speak English and although she knows they're trying to fix her leg, she doesn't understand why they're doing it the way they are. However, with the help of friends she makes it through the operation. Then the real work begins as she struggles with physical therapy and recovery. However, Tuyet has boundless determination and insists on standing on her own two feet, both emotionally and physically, and finally triumphs. Along the way there are incidents and growing experiences that give the reader a good look not only at Tuyet's childhood but also at the time period.

An historical note explains polio, a disease most western children are, thankfully, unfamiliar with. Further resources offer more stories of children who suffered from polio and where you can get involved to help children in countries that still struggle with this disease. There are also a series of brief author notes explaining some of the things in the book - Tuyet's birthday, why her parents didn't stay with her in the hospital, etc.

Verdict: This is a strong sequel to The Last Airlift. It's just long enough for kids needing a 100-pg biography for school, but also makes an inspiring read for kids who like history and reading about real people. It's nice to see a biography that isn't either a picture book or a massive tome and this offers an interesting look at a unique person and time period. Recommended.

Thank you for the lovely review!!!

This looks very interesting, and so many issues raised- war, vaccinations, immigration and cultural identity. I'm very interested in this.

Another mark in the plus corner!

This looks like a great choice for kids who love biographies. Having the two books in sequence is a real plus too!