Ninja Meerkats: The Clan of the Scorpion by Gareth P. Jones 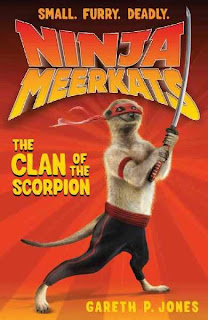 I love this cover so much, from the smirk on the meerkat's face to the excellent subheading above the series title that pretty much booktalks the whole book for you, it is sheer awesomeness. Sadly, these cool British/Australian series with quirky plots never seem to be as popular as I think they will be, but I plan to give this one a generous chance at success.

The Clan of the Scorpion, four tough ninja warriors, set out on a mission to thwart the plan of the evil Ringmaster. Yes, there are evil clowns in this story. The meerkats are all martial arts experts and are led by the smart and quick-thinking Chuck Cobracrusher. The other three members include the super fast and hungry for glory Jet Flashfeet, Donnie Dragonjab the inventor and "master of gadgets" and Bruce Willowhammer, the not-too-bright required muscle. They are guided by the ancient Grandmaster One-Eye with his mysterious Meerkat sayings.

On their adventures they encounter evil acrobats, diabolical poodles, inquisitive children and are forced to use some clever disguises. Of course there are many hilarious moments and sudden twists and turns. My favorite quote, "Hong Kong has one of the deepest harbors in the world, so Bruce had plenty of time to reflect on his life as he and Jet sank to their almost certain death. Mostly, he found himself regretting not having eaten more."

Verdict: This series may not have staying power, but its wacky adventures and silly humor will entertain quite a few kids. If you  need more beginning chapter series, it's definitely worth considering.