The Time Fetch by Amy Herrick 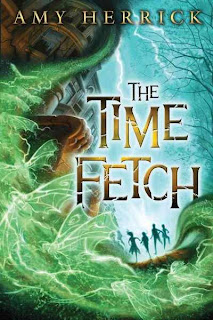 8th grader Edward spends most of his time trying not to be noticed. He lives with his odd aunt and has decided that nothing really matters and he'd rather think than participate in the world around him. Unfortunately, pushy Feenix (Edith) seems to delight in tormenting "Dweebo" and pretty much everyone else who she comes into contact with. It's just her way of making everyone participate. The third protagonist is silent Brigit, the new girl at school, that nobody knows much about. Certainly they don't know about the secret she's hiding and why she doesn't speak.

These three are forced together when a Time Fetch, sent out by the Keeper, is accidentally picked up by Edward and then taken by Feenix. Guided only by cryptic comments and strange, quasi-mythical forces, the three must stop the foragers and the chaos that threatens to destroy time and engulf them all.

This debut fantasy reminded me strongly of Diana Wynne Jones, but it just doesn't have that sense of character that pulls the chaotic magical elements and hints of mythology along. The time fantasy was very Diana Wynne Jones, with mythical creatures who mysteriously hint at their true  natures, a truly fearful blending of Norse myth and Grimm fairy tales, and a gradual building of magical forces. Edward's aunt was also very much in the tradition of DWJ, with her combination of eccentricity and intelligence. The protagonists start out as DWJ people, being neither particularly lovable nor sympathetic, but they just don't stay strong throughout the whole story. There's never any reason for Edward's attitude and Feenix eventually seems more like a posturing mean girl than the strong, unique woman she's destined to become.

Verdict: This wasn't perfect, but for a debut fantasy it's not bad. DWJ fans will probably really like it, and I was quite taken with it myself, despite the flaws. However, DWJ is not particularly popular at my library, alas, so I will probably pass on it myself. If you have an audience for this type of fantasy though, it's worth adding. I will also add that I was quite awed by how British this American book by an Iowan author sounded though!