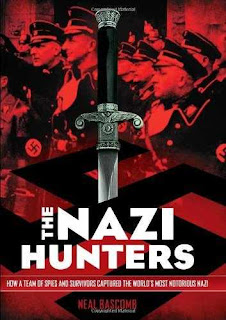 This is the young reader's edition of Neal Bascomb's 2010 book, Hunting Eichmann. I haven't read the original adult version, so I can't compare the two, but I thought this version was pretty good.

The story begins with a tense and mysterious prologue, set in 1960, and then jumps back to 1944 and introduces Eichmann setting out for Hungary where he was responsible for the transport of Jews to concentration camps. As the story slowly builds, Bascomb introduces more characters - the Jews who escaped or survived the Holocaust and remembered Eichmann, the various agents who gathered information on him, the Argentinian Jews who discovered him in hiding, and the politicians who finally gave the go-ahead. The story starts moving faster once the team is formed and Bascomb gives a blow-by-blow account of Eichmann's capture and the team's escape from Argentine. The story ends with Eichmann's trial and a discussion of how his capture affected history, especially in regards to the Holocaust.

There is copious background and supplementary material including lists of participants, detailed source notes and an author's note. The book itself includes photographs and images of source material, such as doctored passports and ids.

While the book isn't quite as pulse-pounding as it would seem to be from the subject matter, and in fact drags in some places when describing actions down to the nth degree, this is an historical account that will definitely grab the attention of kids who are aficionados of World War II. It doesn't shy away from the harsh realities of the Holocaust, but there are very few descriptions of any atrocities and those that are included are presented in a brief, matter of fact tone. The age ranges I've seen for this are mostly grades 7-9, but I feel comfortable putting it in the juvenile nonfiction and recommending it to 5th grade and up.

Verdict: World War II is a subject that always seems to interest kids at a certain age and this is a great addition to your nonfiction section for those kids hungry for more detailed chapter books. It's also a good stepping off point for kids who are ready to move up to the adult nonfiction history section. Bascomb does a good job of building the story with strong research to back up every aspect and setting the stage for discussions afterwards. Definitely recommended.

I thought this book read almost like a thriller even though we know the outcome before we begin. Bascomb does an exceptional job rewriting for a younger audience. Thanks for sharing this book today,