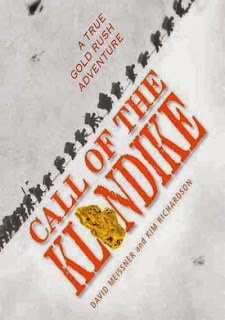 Most people are familiar with the California Gold Rush, but fewer know of the Klondike gold rush, nearly fifty years later. Told primarily through source documents, this is the story of the experiences of two men hoping to strike it rich.

Stanley Pearce and Marshall Bond start out their journey to the Klondike with enthusiasm and optimism. Both have experience in the mining industry and their fathers provide capital for what they are sure will be a highly profitable expedition. They start out in advance of the crowd and things are going well, until they hit the first mountain pass. Gradually, their letters and and reports change to a more grim outlook as they encounter more and more troubles and dangers and by the time their year in the Klondike is over, they're more than ready to return home, without the rich reward they so eagerly expected.

Most of the book is composed of excerpts from the two men's letters and diaries, as well as some of the newspaper reports written by Stanley Pearce. The original documents are connected by brief introductions and explanations of the various events and people referenced in the source materials, as well as additional facts about life during the gold rush. Additional information, such as a timeline, authors' notes, and a brief discussion of the effects of the gold rush on native cultures are also included.

I'm in two minds about this one. On the one hand, I found it interesting and the source documents are fascinating - Kim Richardson is the great-great-nephew of Stanley Pearce and supplied all the original documents. There's not a lot written for kids on the Klondike gold rush and I really liked the way the documents were excerpted and the narrative woven together to show the struggles and gradual disappointment. On the other hand, I'm worried that kids used to more fast-paced history and fictional adventures will find this bland and boring. Most of the letters were written to their parents and in the stylistic conventions of the time the more "exciting" events were downplayed. The whole book is pretty low-key and slow-paced.

Verdict: Although it's well-written and I like the layout, I'm doubtful about its kid-appeal.

Would this pair with Call of the Wild? That was required reading for my son in ninth grade...

Absolutely! I don't think I said so in the review, but they actually met Jack London and there's a whole thing in there about their interactions with him and his inspiration for Call of the Wild.