The Lunch Witch by Deb Lucke 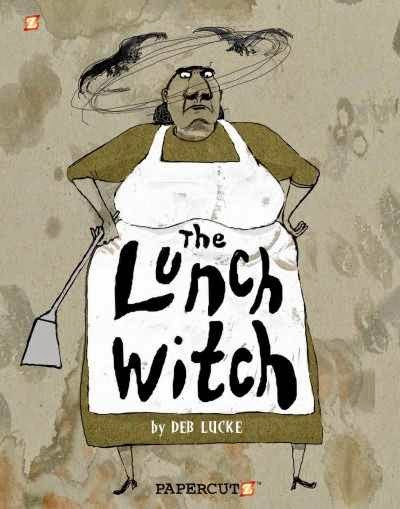 I will admit that I wasn't much interested in this when I first received a galley. But once I started reading it, I couldn't put it down and I found myself alternately laughing and gasping in disbelief "ewww, really? REALLY?" to the very end.

Grunhilda the Black Heart is the descendant of a long line of nasty, evil, powerful witches. Unfortunately, witchcraft isn't so in demand any more and her skills are, well, not all that they could be. She's good enough that her boss at the Salem Witch Museum regrets firing her. (Possibly. Do pieces of dung have regrets?)

But Grunhilda still needs a job. When she finds an ad for being a lunch lady, she decides it's the perfect job for her; and it is, until one of those annoying children figures out that she's really a witch and blackmails her. Madison isn't as smart as Grunhilda thinks she is. In fact, Madison knows she's stupid - everyone says so. She absolutely needs that potion to make her smart. But what she doesn't know is that Grunhilda, well, not all her potions work out exactly right and pretty soon Madison is living a new life in which flies figure largely and snakes are more of a worry than the principal. But Grunhilda has an unexpected change of heart. There's only one problem - will her wicked ancestors let her do something *gag* NICE?

Lucke's art is grotesque and covered with messy black sketches and artfully placed stains. Characters flare their oversized nostrils, smirk with caricatured mouths, and Madison is afflicted with freckles, glasses, and little, tiny legs. It's perfect. This isn't a pretty-pretty story, it's meant to make you giggle and gasp and groan and the art looks fresh out of the kitchen of a lunch witch. Don't miss the final sketch. I won't give it away, but leeches are involved.

The publicity promotes this as similar to Roald Dahl's Matilda and while there's certainly some Dahlesque elements to the story, I'd say this is more grotesque than Dahl ever got. Plus, there's some poignant moments as Grunhilda suddenly empathizes with Madison on feeling stupid. Dahl's children are all rather...perfect, if you think about it.

Verdict: This won't be for every kid, but for those who like gross stories and nasty characters getting a swift comeuppance with an unexpected underdog coming out on top, this will fly off the shelves. Definitely a must have for your library to balance out all those *gag* NICE stories.