The Gauntlet by Karuna Riazi 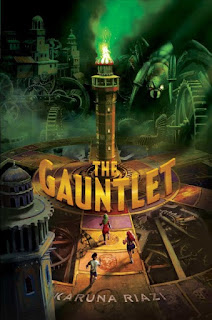 [Originally published in 2017]
This is the first book I've read from Simon and Schuster's new imprint, Salaam Reads. It. Was. AWESOME.

Farah's twelfth birthday is not going well. Even though her best friends Essie and Alex are there, she's uncomfortable with all the strangers her parents have invited and feels almost a stranger with her friends, now that her family has moved to a new home. She's also exasperated with her little brother, Ahmad. Usually, Farah is patient with him, knowing that his ADHD makes it hard for him to control himself, but today she just wants something for herself.

Something like her strange aunt's present, a mysterious board game with unexpected powers. But Farah quickly discovers some things you can't handle on your own. Like it or not, Farah must lead her friends into the Gauntlet of Blood and Sand if she wants to save her brother - and all the other creatures and people trapped there.

Farah is an amazing character - tough, determined, knowledgeable, but willing to ask for help and dealing with everyday issues in the midst of her fantastical adventure. Her friends are fully realized, with their own quirks and personalities, but never overpower Farah's place as the central character. The game world is almost a character itself, with evocative descriptions of the souk, the palaces, and the sand that flows everywhere. Throughout the story, the thread of games is woven; Farah's family loves to play board games and this knowledge helps her meet the challenges and solve the clues that will hopefully allow them to survive the dangerous world of the Gauntlet of Blood and Sand.

Verdict: A riveting adventure with plenty of peril, excitement, and a series of great clues and games paired with a stellar set of diverse characters, this book is a must-have for your libraries and a top choice for book clubs and recommendations. Strongly recommended.
Revisited: Definitely recommend for readers who like Rick Riordan's imprint, Rick Riordan presents. There's now a sequel available as well, The Battle.

I'm going to try this one for my daughter. Thanks!!