Nico Bravo and the Hound of Hades by Mike Cavallaro 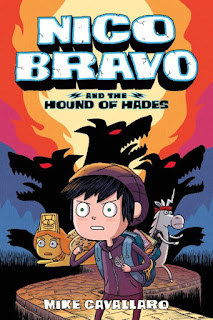 Adventure, mythology, and war-weary unicorn veterans. For the right reader, this book will be an instant success - I only hope the promised sequels arrive in timely fashion!

The story opens with a mysterious figure paddling across the ocean in a giant pot. What are they searching for? Readers won't find out until later, as first they have to meet the characters of Vulcan's Celestial Supply Shop. Nico Bravo is an ordinary kid who likes to make marshmallow lasagna. Lulu is a sphinx and Buck is a veteran of the Unicorn Wars (Although nobody else has ever heard of them - or of any other unicorns.) The three of them run a shop in an odd corner of a hidden dimension where gods and other mythological and celestial beings come for their supplies.

Things are no more exciting than usual until the mysterious figure reappears and turns out to be a descendant of the great hero Beowulf. They're determined to prove their worth as a monster-slayer by slaying the terrible Hound of Hades. Nico is horrified - not only is Cerberus the only thing holding back the masses of undead in the underworld, its also a pretty decent dog. But Beowulf's descendant, Eowulf, doesn't care about any of that. On top of everything, Vulcan gives them the most amazing, magical sword he's ever made! Nico decides to set out, with just his wits, a magic backpack, and a few helpings of marshmallow lasagna, to try and stop Eowulf - and try to explain that just because something is a monster doesn't mean it needs to be killed.

Humor, peril, and adventure ensue. Buck and Lulu get caught up in their own crises, ranging from time travel to falling through dimensions. Some of Buck's mysterious history comes to light and readers will get to meet some really monstrous monsters. The book ends on a surprising cliffhanger, with hints of Nico's secret past while at the same time resolving Eowulf's plot line.

Cavallaro's art wasn't very familiar to me, but others may recognize him from his work on Jane Yolen's Foiled duology. His characters are short and stocky, with stick-like legs and arms and cartoon-wide eyes. As much of the action takes place in the underworld, there's plenty of opportunity for melting red and orange scenery, goo-dripping monsters, and piles of skeletons, but there's little to no actual gore and kids who are reading Bone, Amulet, and other fantasy adventures should have no problem with it.

Verdict: A funny, exciting, and interesting start to a new series. Hand this one to fans of Percy Jackson, Bone, Dream Jumpers, and other fantasy adventure verging on creepy stories.