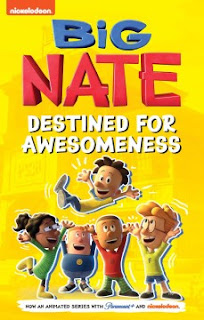 This isn't so much a review as a discussion of collection development choices. Before Wimpy Kid, there was Big Nate. A comic strip and then a notebook novel, Big Nate is similar in many ways to Wimpy Kid, although much more episodic, having started and continued life as a daily comic strip.

Big Nate, a white boy in middle school, considers himself a superior student, intelligent, witty, handsome, and irresistible to the girls he considers desirable. His "talents" are playing chess and drawing comics, but he continually insists that he's not a "nerd." His single father is played for laughs and he has a mutual hate-hate relationship with his teen sister. Of course, Nate's awesomeness is all in his own mind. Even his so-called "friends" find his arrogance, selfishness, and clueless behavior to be too much at times. He continues to pursue Jenny, although she consistently pushes him away and is in turn pursued by Kim, portrayed stereotypically as fat, stupid, and aggressive. He also spends a significant amount of time hating his social studies and homeroom teacher, Mrs. Godfrey, who continually tries to get him to actually do some work but he considers to be picking on him. In a nutshell, Nate is a complete jerk. His antics are sometimes humorous, but the only reason I tolerate him is seeing him repeatedly get his comeuppance.

That's my personal view. Wimpy Kid fans are usually quite happy to read Big Nate when they discover the series, although he doesn't have the brand recognition of Wimpy Kid. Since I consistently have to replace the books, both the paper over board notebook novels and the paperback comic collections, I have started buying them in prebound formats so when they inevitably fall apart I can get them replaced through the lifetime binding guarantee. I had vaguely realized there was going to be an animated series, but hadn't thought about it much since, in my experience, kids almost never connect adaptations with the original book or series.

Bearing in mind that I have not read all the Big Nate books and comic strips and have not seen the animated show, the plots of these episodes were, in my opinion, over the line and much nastier than the book. In one episode, Nate is in danger of getting too many detentions and, following a school legend, disappearing. A new student shows who is even more of a prankster and Nate eventually "sacrifices" himself (he gets splashed with gross food from the cafeteria) to "save" the principal while the new kid turns out to be an escapee from the "institute for criminally insane tweens." Nate's "heroic" actions don't last long however, and in subsequent episodes he deliberately spends thousands of dollars on his dad's credit card and evolves an elaborate plot to spend time with Jenny, while at the same time hiding his fear of cats. Meanwhile, his sister is attempting to break their father of his psychological fear of using bathrooms outside their home while her father tries to "cure" her of her claustrophobia. 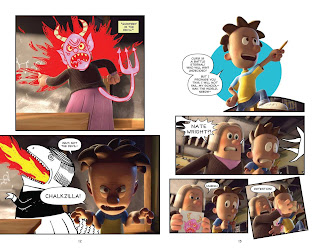 The art is supposedly a "fresh new look" but it's basically stills of animation interspersed with reprinted comic strips which inspired the plot lines.

I can't imagine Nate ever actually worrying about anyone (other than himself) getting hurt and the plot with his sister basically toilet-training their dad was gross and creepy. Not to mention the persistent stereotypes about fat kids, and the overall denigration and harassment of all the girls.

Obviously, I'm not a fan of the series. I find it mildly humorous at best, and this newest iteration not funny at all. I think the stereotypes are harmful and especially dislike the new one of the "insane" kid introduced apparently just for this show especially gross.

I'm still going to purchase this book for the library and continue purchasing (and replacing) the Big Nate books. Why? Well, regardless of my personal opinions, an overwhelming majority of kids like Big Nate and find it funny and their caregivers consider it harmless. I read plenty of crap when I was a kid that was, dare I say, even worse than this (Elsie Dinsmore anyone?) I'll happily recommend other options for families that don't want their kids reading it, and I would love to see more genuinely funny comics and notebook novels that do not include these harmful stereotypes so I could offer better alternatives, but right now this is what we've got. In the end, I do my best to provide a balanced and accurate collection with an emphasis on popular reading materials for all ages, and this is something kids will want to read.

Verdict: I consider this along the lines of other media tie-ins - not something I personally like or recommend, but which kids will want to read and so most collections will want to purchase it.