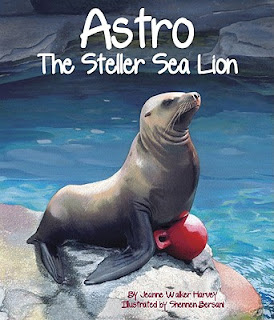 I first saw sea lions (to remember, I probably saw them when I was little but that doesn't count) in the Milwaukee zoo last year. I was instantly in love. They are so cool! So I was pleased to take a look at this book about a special sea lion.

Astro was found alone when he was only a few days old. He was taken to the Marine Mammal Center and fed and cared for until he was ten months old, when the Center returned him to the wild. Or at least they tried! Astro's early experiences had imprinted him on humans instead of other sea lions and he refused to return to the sea. Finally, Astro was sent to the Mystic Aquarium in Connecticut and is now happy in their exhibits and working with the people studying Stellar sea lions.

The text is detailed enough to grab the attention of older children but could also be easily abridged and read aloud to younger children. Animal stories are always a strong draw and this one is clearly expressed and has lots of fun plot points that will hold children's attention. I had to read through a couple times before I appreciated the quasi-realistic illustrations. I was confused because I thought they were digitally altered photographs, then realized they were actually a mixture of paint, colored pencils, and crayons. I would have preferred photographs, but I think most children and parents will enjoy the more artistic illustrations.

Verdict: There are only a couple general information books out there on sea lions and this title makes a nice addition to the limited information and will pique kids' interest in these fascinating animals. Take a look at your collection on marine mammals and if you only have a few titles, or outdated materials, I would recommend adding Astro when you update this section. It's a real child-pleaser!

I enjoyed that story too. I love Sylvan Dell books and their wonderful teacher guide and resources. Thanks for sharing.