Fox and Crow are NOT Friends by Melissa Wiley, illustrated by Sebastien Braun 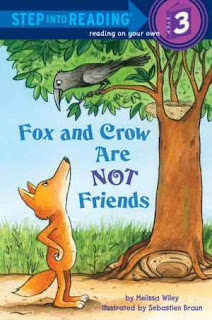 Although it's never referenced in the text, Aesop fables and the classic Three Bears story are slyly incorporated into this delightful subversion of the classic Frog and Toad type easy reader.

Fox and Crow, unlike most disparate animals (Frog and Toad, Houndsley and Catina, Cork and Fuzz, Pip and Squeak, etc. etc.) are NOT friends. It all began with the cheese...

The first chapter is a fairly straightforward retelling of the original fable. Crow grabs some cheese from a picnic, Fox flatters her until she drops it. But it doesn't end there. In the second chapter, Crow borrows a few props from the Three Bears to set a trap for Fox and pay him back. Finally, Fox tries to get back at Crow with some more cheese stolen from Mama Bear, but she turns the tables on both him and Crow and they are forced to work together to repair the damage they've done. They're still enemies, but they've learned that revenge doesn't pay!

Wiley's classic, funny, but age-appropriate text is brightened by Sebastien Braun's cartoon illustrations. The sly fox, clever crow, chunks of cheese, and Mama Bear are all simply but skillfully presented, adding just the right amount of color and decoding help to the text.

Verdict: This is a fun new easy reader with a great text and illustrations. I hope these two will collaborate on more stories. I strongly recommend purchasing the library bound edition, as this is one that will be read again and again!