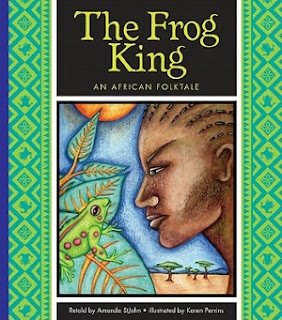 I'm looking at a selection of folktales from around the world today. This series is produced by Child's World and most of the titles are written by Amanda StJohn.

The Frog King, although it has a lovely cover, immediately strikes a sour note with it's subtitle of "An African Folktale". This is doubly annoying, since it says in the first paragraph that this story is from Kenya. So why does it not say "A Kenyan Folktale"? The other titles don't say "A South American Folktale" or "A Caribbean Islands Folktale".

The story: A group of frogs croak and play all night, annoying the other animals. The frogs decide they need a king they can respect to keep them in order and go to the god Mmumi. He first gives them a stone, but when that doesn't work and they wake him a second time, he sends Mamba, the first crocodile. The note at the back gives specific information on the origins of the tale, explains some of the Swahili words, and explains...the...moral of the tale? "The Frog King teaches us to speak in a soft voice when playing in a space shared with other people." Um...ok...that's right kids, use your library voice or THE CROCODILE WILL EAT YOU. 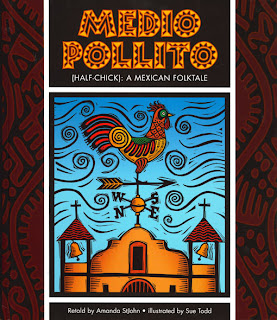 Now we move on to Medio Pollito, Half-Chick, a Mexican Folktale (I thought this one came from Spain originally, but I could be wrong...hmm, according to the internet, it did originally come from Spain.) Ok, so Half-Chick wants to see the world and decides to hop off to the nearest town. Along the way he meets a trapped river and a dying fire, both of whom he refuses to help, and a lost wind who he does help. Arriving in the town, he is promptly popped into a pot where the fire and water both refuse to help him. The wind however, blows him out of the pot and up onto the roof where he becomes a weathercock.

According to the back notes, "Folktales don't just entertain. They have a job to do. They teach us to be the best person possible."

Um...ok. Mind you, the version I learned of Medio Pollito had him helping no one, and the wind took pity on him. Either way, he's stuck up on top of a roof. 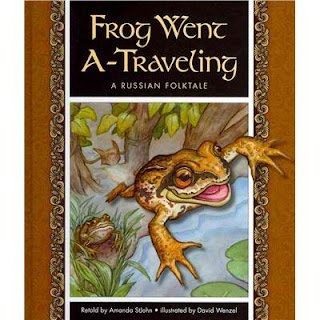 The version I've always heard of Frog Went A-Traveling involves a tortoise - the tortoise wants to fly, some birds agree to carry him while he holds a stick in his mouth, he gives way to the urge to brag, and falls to his death. That's pretty much this story, although it's a frog and she has the foresight to get the ducks to fly low, so she lands in the mud.

Apparently this is a Siberian tale - again, why not "A Siberian Folktale" on the front? Also, if you're going to draw a moral this is the one I'd choose - and it's the only one that doesn't have a lesson! Instead, it tells us how folktales are passed down (surprise - lots of people tell them to other people) and gives the reader a natural history lesson on Siberia. 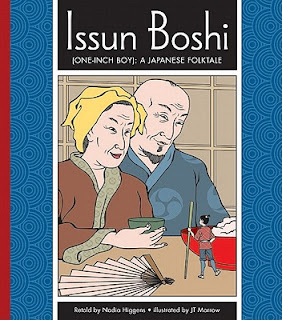 Issun Boshi is a Japanese version of Tom Thumb (or the other way around, if you prefer). An old couple want a child, no matter how small, and they get Issun Boshi, who is only an inch high. He eventually ends up serving a lord and saving his daughter from an evil demon. He then gets the demon's magic hammer and becomes full-size, whereupon the girl falls in love with him and marries him. This, according to the back notes, means that you should never judge based on appearances. 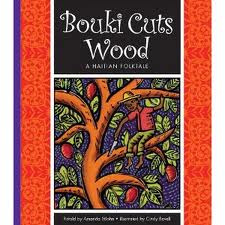 Finally, the story I think might be the funniest, Bouki Cuts Wood is a Haitian fool tale. Bouki gets into numerous difficulties because of his foolishness and finally ends up thinking he is dead! "Bouki makes silly mistakes so that we can learn from them." Um...ok...should you ever feel the urge to saw a branch off while you're sitting on the end, or think that a bleating goat signifies your death, feel free to reflect upon this story.


Verdict: The text is not too long, readable for an older group, say kindergarten. The art is the best part of these stories; each title has a different artist and the pictures are very attractive. However, the back notes are really laughable and that plus several other minor details I've mentioned above make me suspicious as to how much these stories have been abridged and cleaned up for modern readers. Multicultural folktales (or any folktale really) aren't too popular at our library, so unless you have a big demand for folktales I'd pass. I'd also add that these are available only in library bound editions and cost over $20.

Published 2011 by Child's World; Borrowed from the library

HI Jennifer, What an interesting selection of folktales -- always enjoyed by children. Thanks for the reviews