Nonfiction Monday: Look up! Bird-watching in your own backyard by Annette LeBlanc Cate 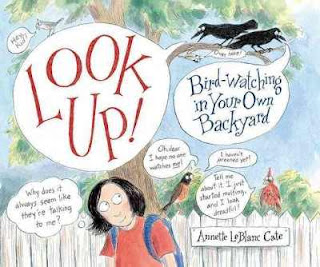 Sometimes it seems weird to be constantly encouraging kids to go outside. After all, I'm a library (well, not me personally, but you know) and I want kids to read, something that usually happens indoors. Also, it feels a bit hypocritical because while I do have a mini-garden and walk almost every day, I'm really not much of an outdoors person. However, to me libraries are more than books and when I say that I don't mean they're all about digital stuff. I mean that the library is a starting point for exploring the world, something I try to emphasize in as many of my programs as possible.

What, exactly is the point of this long introduction? This book does an awesome job of piquing kids' interest in the outdoors and making what might sound like a boring hobby (bird-watching) something kids might try out a time or two.

At only 50 pages long, this may look like a lengthy picture book, but every nook and cranny is packed full of information; including the endpapers! The endpapers have a humorous guide to bird-watching; what to take (including the right kind of friend) where not to go, how to sit and watch. After introducing herself and explaining how she became interested in bird-watching, Cate jumps right in and talks about why, where, and how to look for birds in your own backyard, town, or city, record what you see, and especially identify different kinds of birds. She says right off that she's not an ornithologist, just an enthusiast, but the identification pictures of various birds are pretty clear, not to mention funny.

There were a couple pictures, like the wheel of brown birds, that weren't labeled and in some places there is so much information packed in that it's a little overwhelming and confusing, but overall this is a fun book about a hobby most kids don't think about and are unlikely to have tried.

Verdict: If you're looking for slightly unusual books to add to your hobbies and "stuff to do" section, this fits the bill. It's funny just to read on its own too, with lots of humorous comments from the birds and the author as well as facts about birds and their habitats.

Thanks for posting this! We have these big, lovely windows across the back of our library, and this book makes me want to install a few bird feeders and prop some bird books on the shelf in front of the windows. :-)

I've got a big window too, but bird watching doesn't happen - I get squirrel-watching. Oh well.

I mean, in my apartment. I've got a whole wall of windows in my library, and that's actually not a bad idea...hmmm

If you want to take it a bit further, there's the Great Backyard Bird Count in February. A very child-friendly example of citizen science that ties in nicely with this book.

Hope your tomatoes are doing well :-)

Yeah, I bought that Citizen Science book - don't know if anybody is doing it though. Our windows also front a busy street and we do have vandalism problems, so I'm not sure if bird feeders would fly. Heh heh heh.

Oh I don't even TRY to plant tomatoes. I have four pots of mint, morning glories, nasturtiums and pansies with 3 foot wire netting wrapped around them and a little four foot bed with gladiolas and irises. It did have some other bulbs but the squirrels ate them all. I have no sun either, so I'm a little limited in what I can do.

I love the sound of this book! I have a bird watcher it two every year in my class, and this would be perfect to make them happy as well as inspire others to get out and bird watch, too.

My director just approved bird feeders! That was fast! Will be a while before we actually do this though...