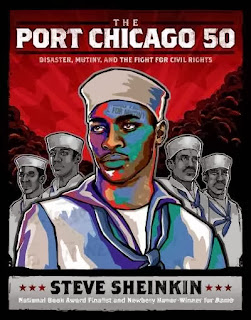 In 1941 American joined War War II to fight for freedom. But there wasn't much freedom in America for African-Americans, even in the army. Black soldiers were restricted to cleaning, cooking and other menial and often dangerous chores; like loading ammunition. In 1944, a partially-loaded ship exploded. 320 sailors and civilians were killed and close to 400 were injured. 202 of the dead were black sailors. A few weeks later, the survivors were ordered to continue loading ammunition, with no additional safety measures or training. They refused and sparked a controversy that ended with 50 sailors being convicted of mutiny and the eventual desegregation of the Navy.

Sheinkin doesn't shy away from the grim reality of life for black soldiers, prefacing his story with a context of segregation, discrimination, and even murder. However, he doesn't push the reader to a specific conclusion. Sheinkin offers a compelling narrative from the stories and memories of the survivors and other protagonists but lets the reader make up their own mind about what really happened and civil disobedience in the military and during war.

In children's books especially, World War II is often portrayed as the "good war." Yes, horrible things happened, but the "good guys" and the "bad guys" were clear-cut and the good guys won. This isn't how I was taught history and I was shocked when I discovered last year a representative sample of adults and kids I was talking to knew nothing about the internment of Japanese-Americans. I was talking about this to our head of circulation, who to put it in perspective is a little younger than my mom, and she said they weren't taught the Holocaust in school when she was a kid.

I think it's important to have a balanced view of historical events and get kids to read beyond the "good guys vs bad guys" type of histories, especially for this age group. These are difficult conversations to have and parents and teachers need to think carefully about when kids are ready to deal with the harsh realities of history, but at some point, history in all its warts and horrors should be taught.

Verdict: This isn't an easy story to read, and there is some harsh language and harsh realities in the historical record, but Steve Sheinkin does an excellent job of writing his research in a way that's readable but not sensationalized. I usually booktalk Sheinkin's work to 6th graders, and while I wouldn't go with the publisher's age level of 9-11, since I think most kids that young wouldn't be able to understand the story, I think middle school is a good time to introduce kids to the complexity of history and I would give them this book, even if it's a difficult read. Due to the language, I will be putting this in our teen area.

It's a good point to remember- the good guys in WWII did some despicable things. Canada even cut off Jewish refugee children which is really disturbing. This looks like a great read, thanks.

I didn't know that - I'm afraid all I know about Canada and the Great Wars is WWI as seen through the Anne books (-:)

I really think, as kids get older, that they should be able to read more nuanced history and this is a really balanced account of a very controversial incident.