Tangle of knots by Lisa Graff 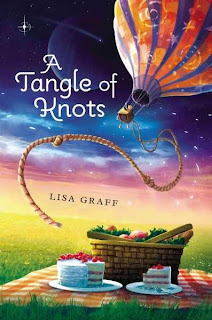 In a world where almost everyone has a special Talent, anything can happen and in this story it does. An orphan with a Talent for baking cakes, a mysterious man who arrives and disappears without warning, an embittered old man with a secret, and a young girl desperate to find her Talent, all come together, along with a host of other characters, to become part of a story of redemption, family, and Talents.

It's impossible to avoid comparing this book to Ingrid Law's Savvy. Both feature quirky Southern characters, small towns, quasi-magical Talents, family secrets, and spunky girls trying to find their place in the world. Savvy rose above its genre (no, I am not a fan of Southern Quirk) with warm, true characters and a skillful blending of plot and emotion.

A Tangle of Knots however, is just that - a tangle of inter-relating stories and characters. The book hops so quickly from one story to another that the reader never gets invested in any one person and the array of Talents, quirks, and characters is confusing. There are pervading themes, most especially that of redemption and moving past mistakes, but there's so much else going on that it's hard to keep track of the underlying plot points.

That being said, is this a bad book? No, not at all. It's exuberant and cheerful and has lots of fun characters, talents, humor and a fair dose of excitement, not to mention plenty of cake recipes. Fans of Savvy and Scumble will be delighted to have this read-alike which they'll easily identify by the colorful cover.

Verdict: If you have Savvy fans, buy this. I did and it's been circulating briskly.