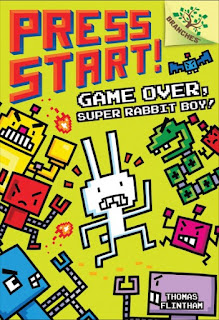 [Originally published in 2017. Updated.]
I have all the Branches series organized into one section in my juvenile series and most of them are popular, with some series definitely winning out over others. When this new series showed up in 2017, it wasn't my personal favorite, but I was pretty sure a certain segment of readers would adore it.

Animal Town is a happy place. Until mean King Viking shows up with his robot army! Now their only hope is Super Rabbit Boy - but will he make it past all the obstacles in his path?

This is basically a narrated video game. Super Rabbit Boy jumps, dodges, and fights his way through a number of obstacles, continually confused when he has to start over at the beginning. Periodically, the story switches to the dark-skinned boy playing the game, with notes of his frustration as he tries to get past the final level.

The art is very bright and colorful, made to look like the pixelated art of an old-fashioned video game. The backgrounds are bright and splashy and the various obstacles more silly than scary. The text is divided between the lighter font of the narration and the darker text of the speech bubbles.

To be honest, I found this unutterably boring. The text is choppy and there's no real plot - like I said, it's basically the narration of a video game. Some kids absolutely LOVE this. It's already a popular title at my library and Minecraft and Mario fans gravitate right to it.

Verdict: A good fill-in for readers reluctant to put down their video games for a book.
Revisited: I buy multiple copies of every new title - I'm not sure what number it's up to now, but there are titles being published into 2021. This is hugely popular, the kids find it hilarious, and it is definitely a top pick for video game obsessed kids as well as those who like silly stories.