Zoo scientists to the rescue by Patricia Newman 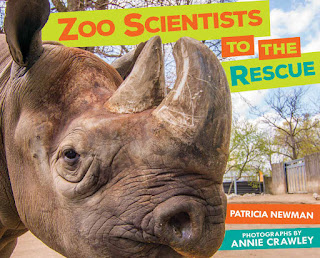 There are several large and small zoos near my town and they are popular destinations for families. Live animals of any kind are always a draw, especially at library programs as well. But I often get frustrated when I hear parents and other adults talk about animals as just...entertainment. Complain that they're not active, want to know why their kids couldn't touch everything, etc. I make it a point to investigate any live animal programs at our library as thoroughly as possible and I support our local zoo (Milwaukee) because of their many animal conservation programs. But how to explain that to the average person who just likes to look at animals?

I think this might be the book to do it. Newman approaches zoos not as entertainment, but as a "living library" and focuses on three researchers who partner with zoos to save endangered species. Dr. Meredith Bastian partners with Smithsonian's National Zoo to research orangutans. After many years of field research, Bastian now works with the Smithsonian zoo to educate children and adults, partner with conservation groups, and work with staff to create the most healthy environment possible for their orangutans. Jeff Baughman works with the Cheyenne Mountain Zoo in its unique conservation project to preserve endangered black-footed ferrets. Once thought to be extinct, the ferrets have made a come-back thanks to the dedicated work of scientists like Baughman. However, the lack of diversity in the gene pool makes it difficult to breed healthy and genetically diverse ferrets. Baughman focuses on the breeding program, but there are many other scientists and zoos who are involved not only in saving the black-footed ferrets but in educating the public about this rare and endangered animal. Finally, Dr. Rachel Santymire at the Lincoln Park Zoo in Chicago, is a scientist involved in conservation efforts for the critically endangered black rhino. Newman recounts Santymire's research both in South Africa and in the US and how she is using the hormones found in rhino poop to improve their breeding chances. Santymire works closely with zookeepers, those who have regular contact with the rhinos, to research their behavior. Her research is used by the zookeepers in turn to educate the public.

Newman finishes the story with a brief historical look at zoos - from the earliest zoos that were entertainments to the modern zoos, as shown in this book, who focus on conservation and education. She addresses the concerns of animals being in an "unnatural" environment and being used as entertainment by encouraging readers to use the example of the scientists in this book and their local zoos to research conservation and be involved in animal welfare and science.

Verdict: This is a unique look at the work of scientists in zoos behind the scenes; it offers both scientific research and opportunities for involvement. Newman looks at zoos from an educational and conservation viewpoint and will hopefully inspire readers to have a fresh perspective on their own local zoos as well as get involved in science. Recommended.