Beginning chapter graphic novels have really blossomed in the past few years. These are the titles I purchased and added last year. Lots of great series, lots of graphic adaptations. My personal favorites were Paige proves it, and the addition to Poppy and Sam: Search for sleep. There were also some great titles from Elise Gravel and readers will be excited by the reissue of Scaredy Squirrel in a chapter book format. Most of them follow the Elephant and Piggie format, with two animal characters and a simple friendship story. 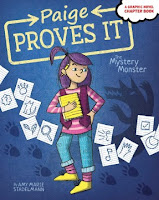 Stand-alones and the first title in a series
Series