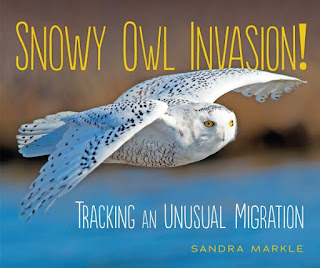 [Originally published in 2018]
Sandra Markle introduces her latest wildlife investigation with a startling discovery in 2013; snowy owls in... Maryland? Why were snowy owls, an Arctic bird that rarely migrate south, suddenly showing up in large numbers in Canada and all down the east coast of North America? To solve the mystery, Markle takes readers through the life cycle of the snowy owl, from breeding season to the importance of lemmings. The snowy owl irruption (an unusual migration pattern) had no definite cause, but various scientists advance different theories such as an unusually large amount of lemmings resulting in a larger number of snowy owl hatchlings surviving and causing increased competition. Heavy winds and storms were another possible cause.

Whatever the reason, the snowy owl irruption of 2013/2014 gave researchers an unprecedented opportunity to study these usually elusive predators, but the snowy owls' arrival in new hunting grounds also caused problems, both with local animals and humans. One snowy owl in particular, given a transmitter during the irruption, added a great deal of knowledge about snowies due to its extensive round-trip migrations, stretching all the way down to Maryland and back to the Arctic. A final chapter discusses the future of snowy owls, the possible impact of climate change, and more of the discoveries made due to the irruption.

Back matter includes an author's note, discussing how the Markle worked with scientists, notes, glossary, additional resources, and index.

Verdict: For readers not yet ready to tackle the more demanding Scientists in the Field titles, Sandra Markle's excellent nonfiction investigations, many framed as mysteries, offer a tantalizing look at real scientific research as well as interesting stories about animals. The large format of the books, which allows for the break-up of text with photographs and additional information, may discourage some close-minded teachers, librarians, and parents, who see them as "picture books" but they will be doing their students and readers a great disservice. Recommend this to kids interested in science, animals, and those who need samples of how research works.
Revisited: Snowy owl irruptions are now fairly common and climate change continues, but this title is still relevant (and in print) and a great choice for school libraries and public libraries with strong nonfiction readers.