Frog vs. Toad by Ben Mantle 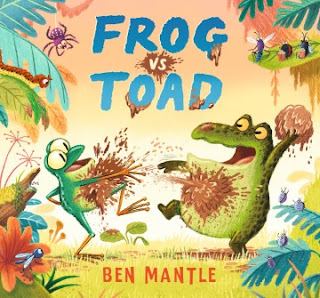 I had expected an informational picture book about the differences between these two amphibians, and that's certainly included, but what I really got was a raucous romp about getting along and resolving arguments.

Frog, his large yellow eyes bulging, snaps a juicy blue and pink fly for his dinner... but only a few seconds later, a big warty toad pops out and tries to snag the same fly! "This is the worst day ever!... I'm being eaten by two frogs!" complains the fly. Fortunately for the fly, it is immediately released as the insulted frog and toad begin exchanging insults over their respective skin, length of leg, smell.... soon they've attracted an audience, and backers on either side. The argument quickly devolves into a giant mud battle and there seems no end to the arguments until...

A new creature appears on the scene, to tell them they're all related in no uncertain terms and to end the story with a surprising, and humorous, twist. An explosion of greens and browns, interspersed with outrageous red, pink, and purple jungle flowers, cover the pages and the grinning mouths of the frogs and toads surround the two arguing protagonists as their exchange of insults gets sillier and sillier.

Verdict: Without an adult guiding the conversation, it's unlikely that this will translate to a discussion of overlooking each other's differences and focusing on our similarities, but it's certainly a funny way to teach the difference between frogs and toads and a rollicking read-aloud, regardless of message.